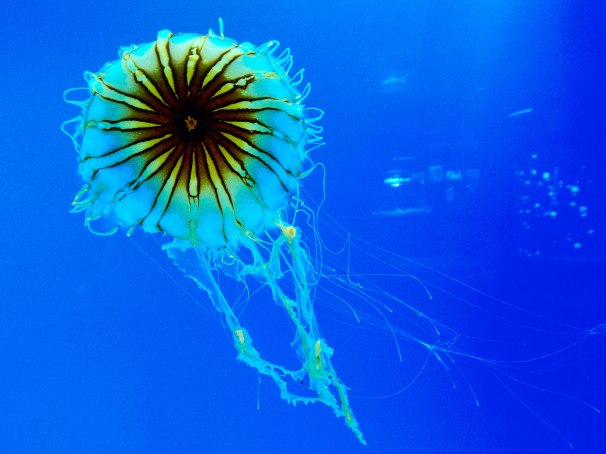 Atlantic Sea Nettle at The Jellies Invasion exhibit at The National Aquarium in Baltimore.

The Atlantic Sea Nettle or East Coast Sea Nettle (Chrysaora quinquecirrha) is a widely distributed species of jellyfish that inhabits tropical and subtropical parts of the Atlantic and Indo-Pacific. It is frequently seen along the East Coast of the United States, such as the Chesapeake Bay. It is smaller than the Pacific Sea Nettle, and has more variable coloration, but is typically pale, pinkish or yellowish, often with radiating more deeply colored stripes on the exumbrella, especially near the margin. [Wikipedia]

The Atlantic sea nettle varies in color based on where it is found. In the Chesapeake Bay, the sea nettle is primarily an opaque white, while in the Atlantic Ocean, it can have a white, red or brown coloration. Nettles populate the Chesapeake and its tributaries primarily from July through September, though some individuals can be present into November. [Aqua Org]

The sea nettle is radially symmetrical, marine, and carnivorous. Its mouth is located at the center of one end of the body, which opens to a gastrovascular cavity that is used for digestion. It has tentacles that surround the mouth to capture food. Nettles have no excretory or respiratory organs. Each sea nettle is either in a free-swimming stage or a polyp stage. The free-swimming stage or medusa stage reproduces sexually, and the polyp stage reproduces asexually.

The Atlantic sea nettle is a bell-shaped invertebrate, usually semi-transparent and with small, white dots and reddish-brown stripes. Sea nettles without stripes have a bell that appears white or opaque. The nettle’s sting is rated from “moderate” to “severe” and can be pernicious to smaller prey; it is not, however, potent enough to cause human death, except by allergic reaction. While the sting is not particularly harmful, it can cause moderate discomfort to any individual stung. The sting can be effectively neutralized by misting vinegar over the affected area. This keeps unfired nematocysts from firing and adding to the discomfort. [Wikipedia]