The White-throated Sparrow (Zonotrichia albicollis) is a passerine bird of the American sparrow family Emberizidae. It measures 15 to 19 cm (5.9 to 7.5 in) in length with a wingspan of 23 cm (9.1 in). They are similar in appearance to the White-crowned Sparrow, but with white throat markings and yellow lores.

There are two adult plumage variations known as the Tan-striped and White-striped forms. On the White-striped form, the crown is black with a white central stripe. The supercilium is white as well. The auriculars are gray with the upper edge forming a black eye line.

On the tan form, the crown is dark brown with a tan central stripe. The supercilium is tan as well. The auriculars are gray/light brown with the upper edge forming a brown eye line. Both variations feature dark eyes, a white throat, yellow lores and gray bill. [Wikipedia] 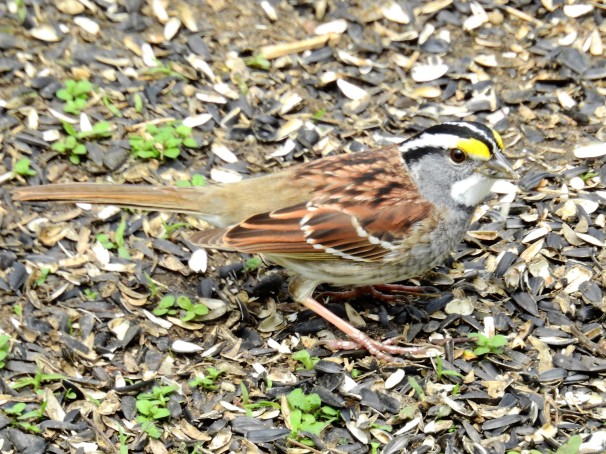 Crisp facial markings make the White-throated Sparrow an attractive bird as well as a hopping, flying anatomy lesson. There’s the black eyestripe, the white crown, and supercilium, the yellow lores, the white throat bordered by a black whisker, or malar stripe. They’re also a great entrée into the world of birdsong, with their pretty, wavering whistle of Oh-sweet-Canada. These forest sparrows breed mostly across Canada, but they’re familiar winter birds across most of eastern and southern North America and California. [All About Birds]

White-throated Sparrow Facts [All About Birds]