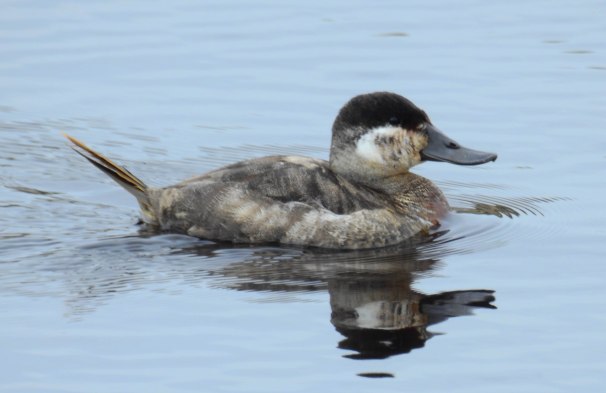 The Ruddy Duck (Oxyura jamaicensis) is a duck from North America and one of the Stiff-tailed Ducks. The genus name is derived from Ancient Greek oxus, “sharp,” and oura, “tail,” and jamaicensis is Jamaica. The Andean Duck was considered a subspecies. In fact, some taxonomists, including the American Ornithological Society, still consider it conspecific.

These are small, compact ducks with stout, scoop-shaped bills, and long, stiff tails they often hold cocked upward. They have slightly peaked heads and fairly short, thick necks. Male Ruddy Ducks have blackish caps that contrast with bright white cheeks. In summer, they have rich chestnut bodies with bright blue bills. In winter, they are dull gray-brown above and paler below with dull gray bills. Females and first-year males are brownish, somewhat like winter males but with a blurry stripe across the pale cheek patch. In flight, Ruddy Ducks show solidly dark tops of the wings. [Wikipedia] 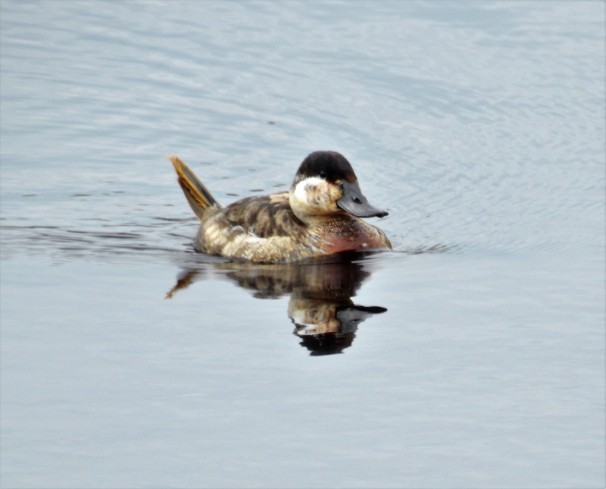 Ruddy Ducks are compact, thick-necked waterfowl with seemingly oversized tails that they habitually hold upright. Breeding males are almost cartoonishly bold, with a sky-blue bill, shining white cheek patch, and gleaming chestnut body. They court females by beating their bill against their neck hard enough to create a swirl of bubbles in the water. This widespread duck breeds mostly in the prairie pothole region of North America and winters in wetlands throughout the U.S. and Mexico. [All About Birds] 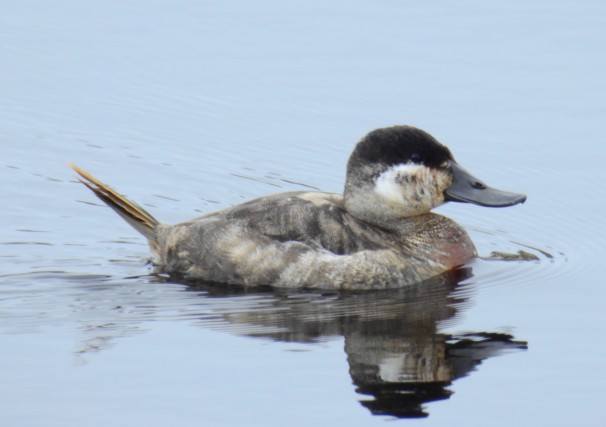 Ruddy Duck Facts [All About Birds]