The Wild Turkey (Meleagris gallopavo) is an upland ground bird native to North America and is the heaviest member of the diverse Galliformes. It is the same species as the domestic turkey, which was originally derived from a southern Mexican subspecies of wild turkey (not the related ocellated turkey). Although native to North America, the turkey probably got its name from the domesticated variety being imported to Britain in ships coming from the Levant via Spain. The British at the time therefore associated the Wild Turkey with the country Turkey and the name prevails. [Wikipedia]

Most North American kids learn turkey identification early, by tracing outlines of their hands to make Thanksgiving cards. These big, spectacular birds are an increasingly common sight the rest of the year, too, as flocks stride around woods and clearings like miniature dinosaurs. Courting males puff themselves into feathery balls and fill the air with exuberant gobbling. The Wild Turkey’s popularity at the table led to a drastic decline in numbers, but they have recovered and now occur in every state except Alaska. [All About Birds] 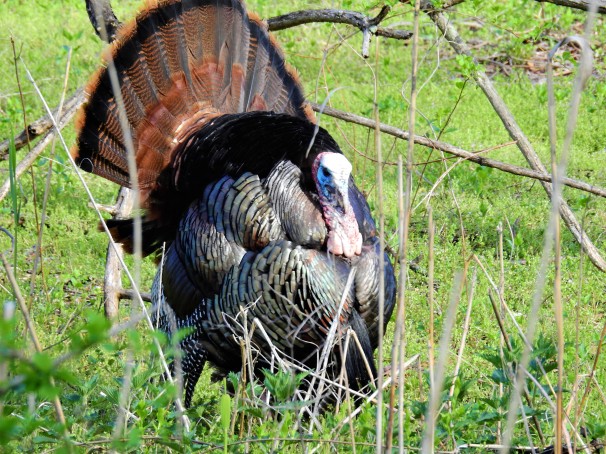 Wild Turkey Facts [All About Birds]