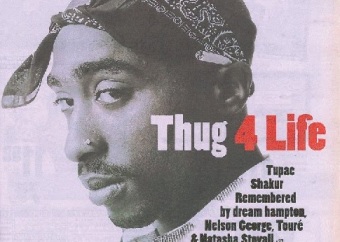 Wild is the wind. Under Nina Simone’s spell those four words are an ululation. Tupac liked to use fire as a metaphor for his overwhelming spirit. (He would warn that to restrain him would be adding fuel to fire.) But I always knew he was wind. Wild and stormy. Not unlike the cold front that moves in on sweltering heat to form a twister or a hurricane. With the power to change and destroy. (“Hurricane Hortense heads back to sea leaving 10 dead Puerto Ricans”.) I always hoped he’d find his center before he turned in on himself, dissipating into a miserable drizzle.

Sideliners will suggest, on radio shows and Entertainment Weekly, he “had it coming” or “chose that lifestyle.” On the streets of New York, some will even tell you they are glad he’s gone. I believe, that for Pac, living intensely was never an option. We were born the same year and poor and came of age in the most violent era our people have known. Pac didn’t have a death wish so much as an understanding (and with it came an eerie peace) that life would be short. (Hence his funeral instructions on “Life Goes On.”) In 25 years, he made four albums and as many films. His mercurial mind was rapid and restless, and in a single sentence he could be utterly profound or stunningly inane. There are those who will live long, smug, mediocre lives and matter only to their house pets. They will never understand Pac, who made every moment matter.

I don’t pretend to understand Pac. There was a time when I had love for him. But mostly because Big, who is fam, loved him. The Notorious B.I.G. and Tupac didn’t know each other long, but they had mad love for each other when they did. They both like to spend money and crack jokes and sip cognac and smoke la and fuck girls, and they did lots of both together. They were two Geninis, born griots, and real niggas. Pac used to school Big about the shady details of the business (by then he’d released two minor records), and Big tried to school Pac about shady hustlers from Queens (to no avail; they were with Pac the night he was arrested for rape). And then Pac straight flipped. On Big who had been loyal. On his man for real—Stretch, his road dawg who died a completely unrelated death (though Pac as much as claimed it) on the anniversary of when Pac was shot in New York. Finally, on his manager Watani, his mother Afeni’s comrade, whose family and home had always been open to Pac as he began his turbulent trek towards manhood, and whom he fired summarily once he started fucking with Suge.

Like a lot of folks who will never go on the record with it, I blame Suge for Pac’s death. Not only do I believe Suge’s silence around the night of the shooting indicates that there will be retaliation (indeed the streets of L.A. are hot like fire this moment—Crips and Bloods are bracing themselves for a war not seen since the 1992 peace treaty that followed the rebellion), but I would also speculate that Suge was all up in his ear with conspiracy tales while Pac was doing his bid up north. When Suge became obsessed with Puff is unclear. Puff always gave props to Death Row. When he had a listening session for Big’s then unfinished Ready To Die at Uptown he invited Suge, who attended. In fact, the last, the last time I saw Pac in person was at Puff’s “24th” birthday party in 1994 (He was actually turning 25). But at some point Suge made it his business to co-opt the talent that Puff had developed, be it Mary J, Jodeci, or more recently Craig Mack. Suge used Pac as a mouthpiece for his beef with Puff’s label, Bad Boy; it had nothing to do with Pac’s death, but this war was bizarre, baffling, and worst of all, dishonorable.
I never knew Pac’s death would leave me so breathless. When the call came from University Medical Center in Vegas, I could hear Afeni wailing in the background. For a moment, for many moments, I forgot that Pac had made my dawg’s life miserable, had violated Prodigy from Mobb Deep (unforgivable), and had made hiphop so bitter. I remembered the way he’d made hiphop three-dimensional. That there never had been any “myth of action” with Pac: He was the myth and his actions were mythic. And sometimes heroic. I remembered the way he walked away from bucking down two Atlanta white-boy pigs who were assaulting a brother at a traffic light. I remembered how his smile was electric. How his mind was beautiful. His eyelashes like wings. I remembered how he wheeled himself out of the hospital less than 48 after taking five shots. I remembered the way he and Big loved. I remembered what he had on the night of Puff’s party.
Mostly I believed with all my heart Tupac was invincible. I believed he’d get his shit together and articulate nationalism for our generation. I was waiting for the day he’d launch a campaign to free political prisoners, of whom his stepfather, Mutulu Shakur, is prominent. I was certain he’d walk out of the Vegas hospital, throwing up West Side. I prayed his ruling orisha, Elegba, would let him down from the fence, loose him, and give him to us. Instead he died a hoarse death. Screaming war cries over stolen beats. Doctors had to carve open the THUG LIFE tattoo printed jailhouse-style across his torso to remove his shredded lung. And most tellingly, he may have died a human shield, not as he predicted in Vibe for some blonde child, but for a 300-plus-pound pimp.
I want to say that for me hiphop is dead. A chapter is undoubtedly closed, and as a generation we’re poorer without Tupac, our fearless trickster. But then there’s Life After Death. And it never stops.
This post was copied from Dream Hampton’s blog, you can see the original post here

2 comments on “Real Niggaz Do Die”