A Yellow-faced Grassquit (male) perched on a wire in Jamaica.

The Yellow-faced Grassquit (Tiaris olivaceus) is a small grayish-green finch that occurs from southeastern Mexico south to northern South America, and throughout the Greater Antilles. It is a common species that occurs in open grassy fields, pastures, roadsides, and clearings. Grassquits often travel in loose flocks, sometimes associating with other species, and primarily forage on grass seeds. Given the relative abundance and large geographic distribution, the conservation status of the Yellow-faced Grassquit is assessed as of “Least Concern.” [Neotropical Birds] 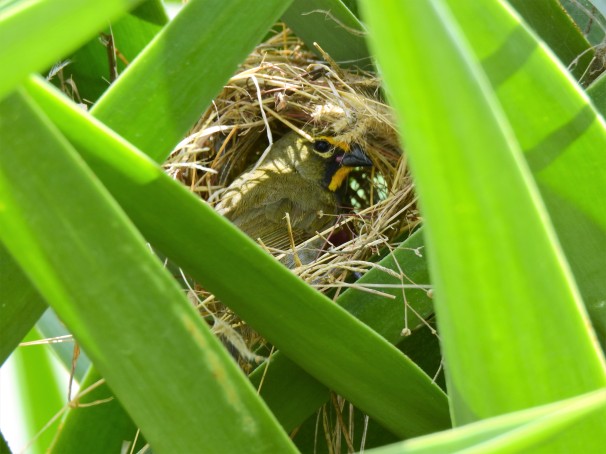 A Yellow-faced Grassquit (male) in a nest in Jamaica.

This small bird has a conical bill, sharper than that of the related Seedeaters. It is 3.9–4.2 inches long and weighs about 0.28–0.35 ounces, depending on subspecies. The adult male has an olive-green back, and its face and breast are black apart from a bright yellow throat, supercilia, and lower eyelid spot. The rest of the underparts are grayish olive. The beak and eyes are dark, the legs are gray.

A Yellow-faced Grassquit (male) in Jamaica.

The adult female is slightly smaller on average than the male. It is dull olive-green above and paler gray below and may have some dark breast smudges. The yellow face pattern is much weaker and softer and may be almost invisible. The lower part of the beak is dark horn-colored (light gray). Young birds are colored essentially like the adult female, but duller and grayer. [Wikipedia]

A Yellow-faced Grassquit (male) in Jamaica.