The Atheist and The Vegetarian

A couple of days ago I attended an orientation for my new job. Naturally, I was excited but anxious to familiarize myself with the organization, my new position, and my new coworkers. The session went smoother than I had expected and we weren’t asked to introduce ourselves (a practice I dread). I hate having, to sum up, my life in a couple of minutes to a bunch of people who could careless. Especially since I already went through extensive drug screenings and background checks to get this job. I believe that your coworkers should get to know you during your employment. Furthermore, some employees feel pressured to be funny or break the proverbial ice during introductions. I will never forget an employee saying in his introduction that he was ‘a Christian and a porn addict.’ He might have been trying to be funny, but I looked at him as a freak for the entire time we worked together. My go-to response was ‘blah blah blah vegetarian‘ and then for the rest of my employment I am known as ‘the vegetarian‘ and have to endure mundane conversations about ‘my lifestyle.’

Fortunately, this orientation was different. The presentations were concise and to the point. We were scheduled for six to eight hours, but we finished well before that time. Later, I found out we were being paid for the orientation, at that point, I wished it had gone on longer. All in all, it was a good day. My good fortune, however, turned to bad when I realized that I was stranded for the next couple of hours and I wasn’t in the mood to take public transportation. In another stroke of good luck, a coworker offered to give me a ride home.

This guy had a European accent that I had trouble placing; he was a heavy smoker (from the smell of his clothes), and I was soon to find out that he cursed like a drunken sailor. We get in his vehicle, and he can’t get his navigation system to work. As cigarette smoke spew from his mouth, they are followed by curse words, which are followed by apologies. He tells me his wife is the one that programmed the navigation system and how it worked fine on his way here. To prevent him from having a stroke, I offer to use the GPS application on my phone – Google Maps to the rescue.

For most of the journey I am quiet, only speaking to respond to his questions or to acknowledge his utterances. He tells me he is from Romania and that he worked as a concierge for the government in New York before recently retiring. The more he speaks, the more I realize that he a quite interesting man. He has lived in four different countries and speaks four different languages. He wanted to retire in Spain, but somehow he ended up in Wilmington, Delaware. He took this job because he ‘worked all his life’ and would have been ‘bored’ at home. Furthermore, he claims he needed the health benefits.

We are about halfway home when John offers me a sandwich. I politely decline explaining to him that I am a vegetarian. This is the conversation that followed:

John: You don’t smoke, you don’t eat meat! What? Are you trying to live forever or something?

John: Bullshit! Let me tell you something. I smoke, I drink, I eat meat. I live god damn it!

John: Another thing! I don’t believe in God. I don’t! Let me tell you something. Religion is fucking bullshit. All religion does is try to control people and separate people. I don’t need to believe in God to be a nice guy. I am a nice guy. Look, I don’t know you, but I offered you a ride home. I didn’t even wait for anybody to ask. That’s what I do. I try to help people where ever I go. I don’t need religion to tell me how to be a good human being.

John: I am telling you. Religion is a waste of time. Work and take care of your family and try to be a good human being. I have lived all over the world, and I can tell you that religion is holding us back. How has religion made the world better?

Me: Ahh.I don’t know. I get what you are saying, though.

John: Think about what I am saying to you. If people tried genuinely to help others, the world would be a far better place. There is no God that is going to help us, we have to help each other.

Me: I understand what you are saying, John. My stop is right up ahead.

John: OK, no problem. Think about what I said to you.

Me: OK. Thanks again. Have a safe drive home. 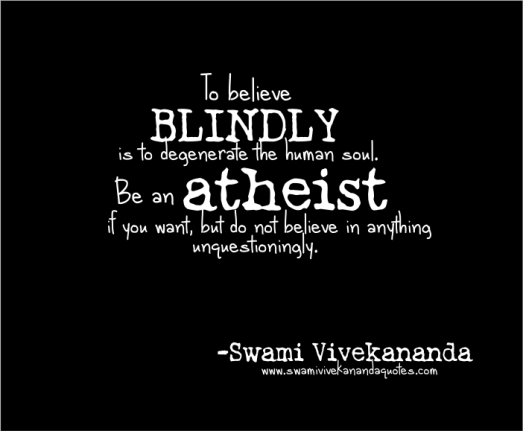 21 comments on “The Atheist and The Vegetarian”