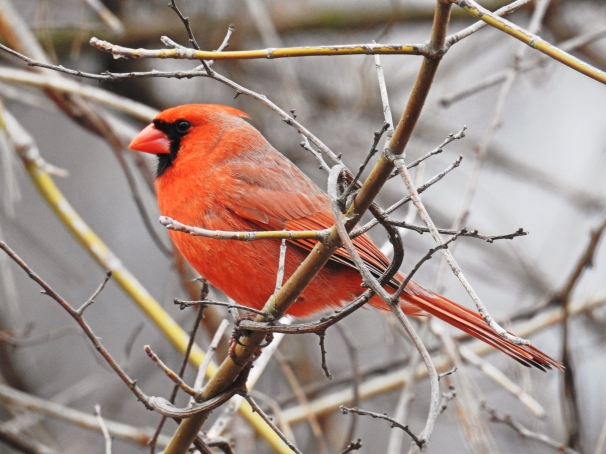 The Northern Cardinal (Cardinalis cardinalis) is a North American bird in the genus Cardinalis; it is also known colloquially as the Redbird or Common Cardinal. It can be found in southern Canada, through the eastern United States from Maine to Texas and south through Mexico. It is found in woodlands, gardens, shrublands, and swamps.
The Northern Cardinal is a mid-sized songbird with a body length of 21–23 cm (8.3–9.1 in). It has a distinctive crest on the head and a mask on the face which is black in the male and gray in the female. The male is a vibrant red, while the female is a dull reddish olive. The northern cardinal is mainly granivorous, but also feeds on insects and fruit. The male behaves territorially, marking out his territory with song. During courtship, the male feeds seed to the female beak-to-beak. A clutch of three to four eggs is laid, and two to four clutches are produced each year. It was once prized as a pet, but its sale as a cage bird was banned in the United States by the Migratory Bird Treaty Act of 1918. [Wikipedia]

The male Northern Cardinal is perhaps responsible for getting more people to open up a field guide than any other bird. They’re a perfect combination of familiarity, conspicuousness, and style: a shade of red you can’t take your eyes off. Even the brown females sport a sharp crest and warm red accents. Cardinals don’t migrate, and they don’t molt into a dull plumage, so they’re still breathtaking in winter’s snowy backyards. In summer, their sweet whistles are one of the first sounds of the morning. [All About Birds] 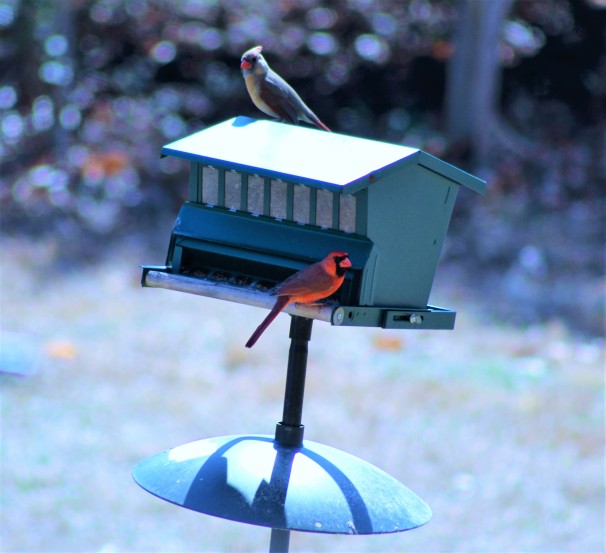 Northern Cardinal Facts [All About Birds]