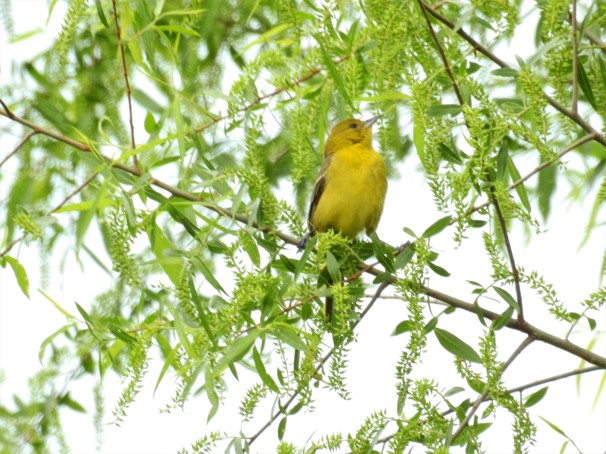 The Orchard Oriole (Icterus spurius) is the smallest species of icterid. This species is 6.3 in (16 cm) long and weighs 20 g (0.71 oz). The bill is pointed and black with some blue-gray at the base of the lower mandible (Howell and Webb 1995). The adult male of the nominate subspecies has chestnut on the underparts, shoulder, and rump, with the rest of the plumage black. The adult female and the juvenile have olive-green on the upperparts and yellowish on the breast and belly. All adults have pointed bills and white wing bars. (Orchard Orioles are considered to be adults after their second year.) One-year-old males are yellow-greenish with a black bib. [Wikipedia]

The Orchard Oriole swaps the typical flame-orange of other Orioles for a deep, burnished russet. Hopping among riverine shrubs or scattered trees, male Orchard Orioles sing a whistled, chattering song to attract yellow-green females. The smallest of North America’s Orioles, it gleans insects from foliage and builds hanging, pouch-like nests during its brief breeding season, and then heads back to Central America for the rest of the year. Orchard Orioles also feed on fruit and nectar in orchards, gardens, and elsewhere. [All About Birds]

Orchard Oriole Facts [All About Birds]