The Swamp Sparrow (Melospiza georgiana) is a medium-sized sparrow related to the Song Sparrow. Adults have streaked rusty, buff and black upperparts with a faintly streaked gray breast, light belly, and a white throat. The wings are strikingly rusty. Most males and a few females have a rust-colored caps. Their face is gray with a dark line through the eye. They have a short bill and fairly long legs. Immature birds and winter adults usually have two brown crown stripes, and much of the gray is replaced with buff. The easiest way to identify this species is by habit. The swamp sparrow is continuously flicking its tail side to side. [Wikipedia] 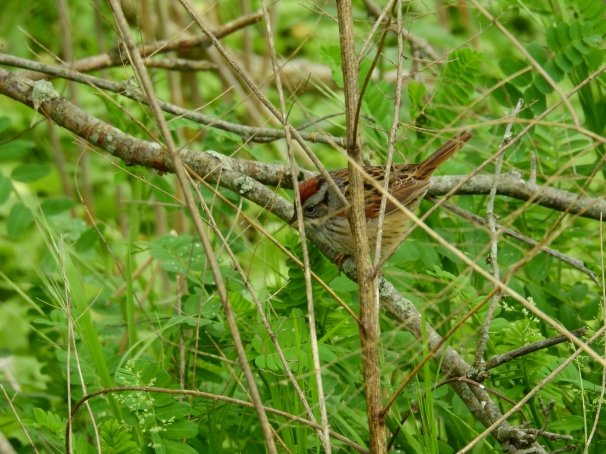 The simple trills of the Swamp Sparrow ring in spring and summer across eastern and central North America. Its name is appropriate, as it does live in swamps, but it can be found in a wide range of other wetland habitats too. [All About Birds]

Swamp Sparrow Facts [All About Birds]