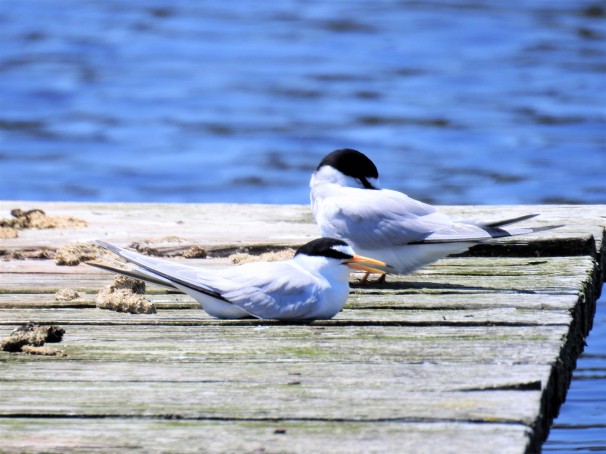 The Least Tern (Sternula antillarum) is a species of tern that breeds in North America and locally in northern South America. It is closely related to and was formerly often considered conspecific with, the Little Tern of the Old World. Other close relatives include the Yellow-billed Tern and Peruvian Tern, both from South America.

It is a small tern, 22–24 cm (8.7–9.4 in) long, with a wingspan of 50 cm (20 in), and weighing 39–52 g (1.4–1.8 oz). The upper parts are a fairly uniform pale gray, and the underparts white. The head is white, with a black cap and line through the eye to the base of the bill, and a small white forehead patch above the bill; in winter, the white forehead is more extensive, with a smaller and less sharply defined black cap. The bill is yellow with a small black tip in summer, all blackish in winter. The legs are yellowish. The wings are mostly pale gray, but with conspicuous black markings on their outermost primaries. It flies over water with fast, jerky wing-beats and a distinctive hunchback appearance, with the bill pointing slightly downward. [Wikipedia]

The smallest of American Terns, the Least Tern is found nesting on sandy beaches along the southern coasts of the United States and up the major river systems far into the interior of the continent. [All About Birds]

Least Tern Facts [All About Birds]